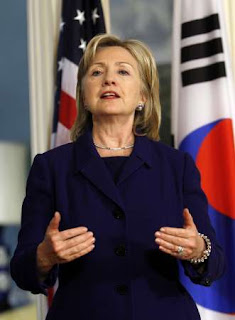 WASHINGTON – Secretary of State Hillary Clinton on Thursday said she was heartbroken by the state of U.S. finances and laid the blame in part on "outrageous" advice from former Federal Reserve Chairman Alan Greenspan.
Clinton, appearing before a congressional panel to defend the State Department's $52.8 billion budget request for the 2011 fiscal year, said the Obama administration was well aware of the fiscal pressures battering average Americans.
"It breaks my heart that 10 years ago we had a balanced budget, that we were on the way of paying down the debt of the United States of America," Clinton said.
"I served on the budget committee in the Senate, and I remember as vividly as if it were yesterday when we had a hearing in which Alan Greenspan came and justified increasing spending and cutting taxes, saying that we didn't really need to pay down the debt -- outrageous in my view," she said.
Greenspan was named central bank chief by President Ronald Reagan in 1987 and held the office until 2006, serving throughout the presidency of Clinton's husband, former President Bill Clinton.
Seen an economic oracle when in office, Greenspan's words regularly moved financial markets.
But his image became tarnished after he retired, with many blaming him for helping inflate a housing bubble that eventually burst, setting off a grave financial crisis and plunging the economy into recession.
Public concern about the debt mounted after the government posted a record $1.4 trillion deficit for the fiscal year that ended September 30. The issue looms large ahead of congressional elections in November.
Greenspan, known as a deficit hawk, late last year endorsed a proposed bipartisan commission to help make tough calls needed to bring U.S. debt under control.
Clinton noted that the 2011 budget request for the State Department and the U.S. Agency for International Development represented a $4.9 billion increase over 2010, most of which would fund work in the "frontline states" of Iraq, Pakistan and Afghanistan.
"We are now assuming so many of the post-conflict responsibilities, and that is the bulk of our increase," Clinton said.
Republican Representative Ron Paul, who has helped lead congressional efforts to rein in the deficit, pressed Clinton on U.S. diplomatic spending including a plan for an expensive new U.S. embassy building in London.
Clinton said the costs of the proposed modernist glass cube would be offset by savings on rent for satellite offices that embassy personnel must now use.

"I believe I can make the case that we're not asking for new money," she said.
Posted by HILL-FORCE NEWS at 3:31 PM